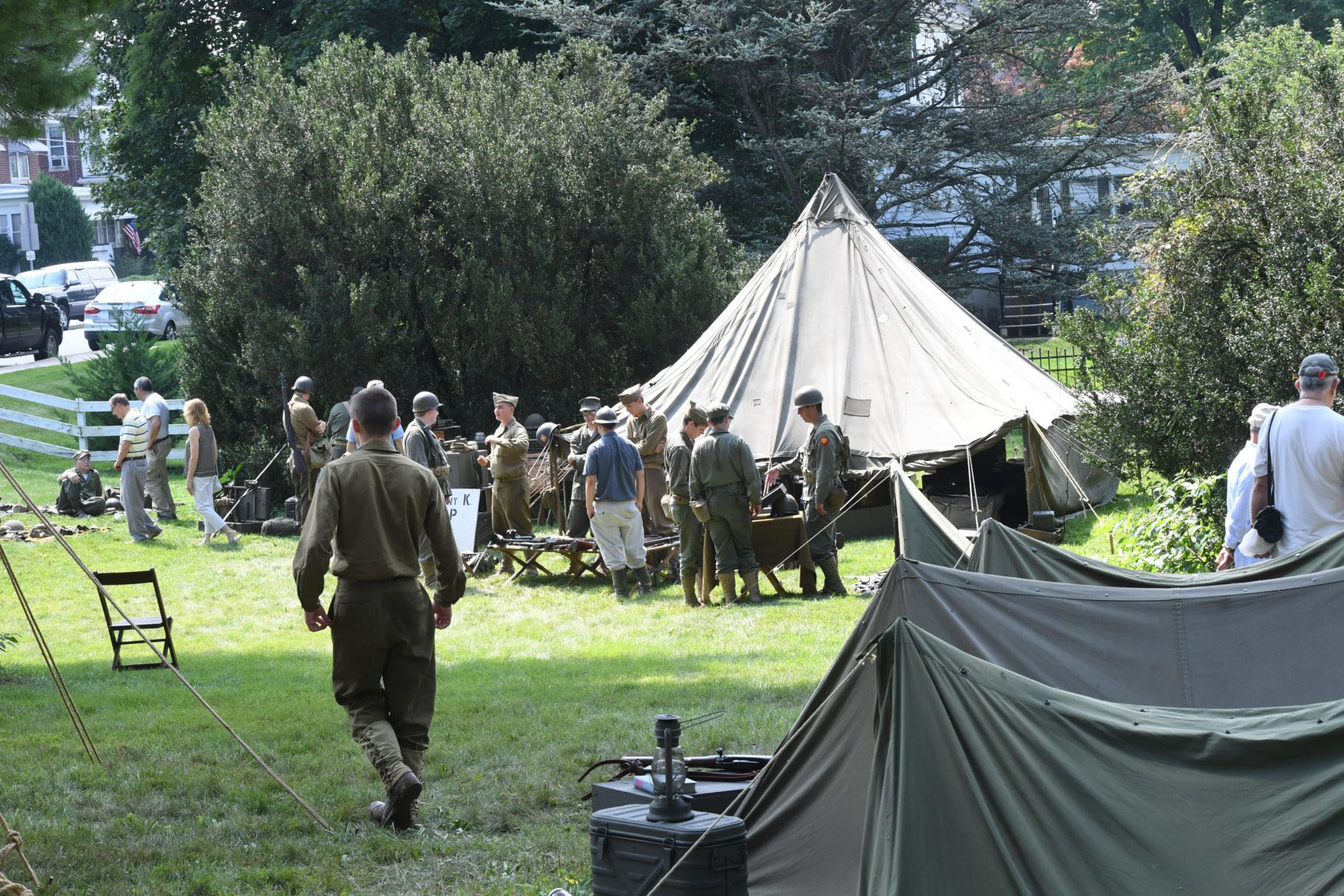 The Northern York County Historical And Preservation Society is hosting its 8th annual WWII Tribute on Saturday, August 11th, 2018 at Dill’s Tavern. This free event begins at 9am and features WWII living historians, 1930s and ’40s-era vehicles, encampments, speakers, and tactical demonstrations. The Dillsburg WWII Honor Roll will be featured alongside photographs and biographies of many of our local heroes. A forum featuring veteran speakers will begin at 10am. Food concessions courtesy of the Dillsburg American Legion Post 26 Women’s Auxiliary.

10am
Tactical Demonstration – Tavern fields, orchard
Manual of arms demonstrations, weapons inspection, safety checks, firing demonstrations, military bearing and tactical movement exercises will be held throughout the day.
Veteran Speakers – All speakers will be located in the Tavern courtyard

The annual USO-style Big Band Dance will follow that evening at the Dillsburg Fire Hall, 109 S. Baltimore Street. Jazz and big band music will be performed live at 7pm by The Will Fisher Orchestra under the baton of Clair Zeiders. Wear your dancing shoes and swing dress! Light refreshments will be provided. Admission to the dance is $15 per person with proceeds going to NYCHAPS. WWII veterans will be guests of NYCHAPS and admitted at no charge. Tickets to the dance may be purchased securely online. 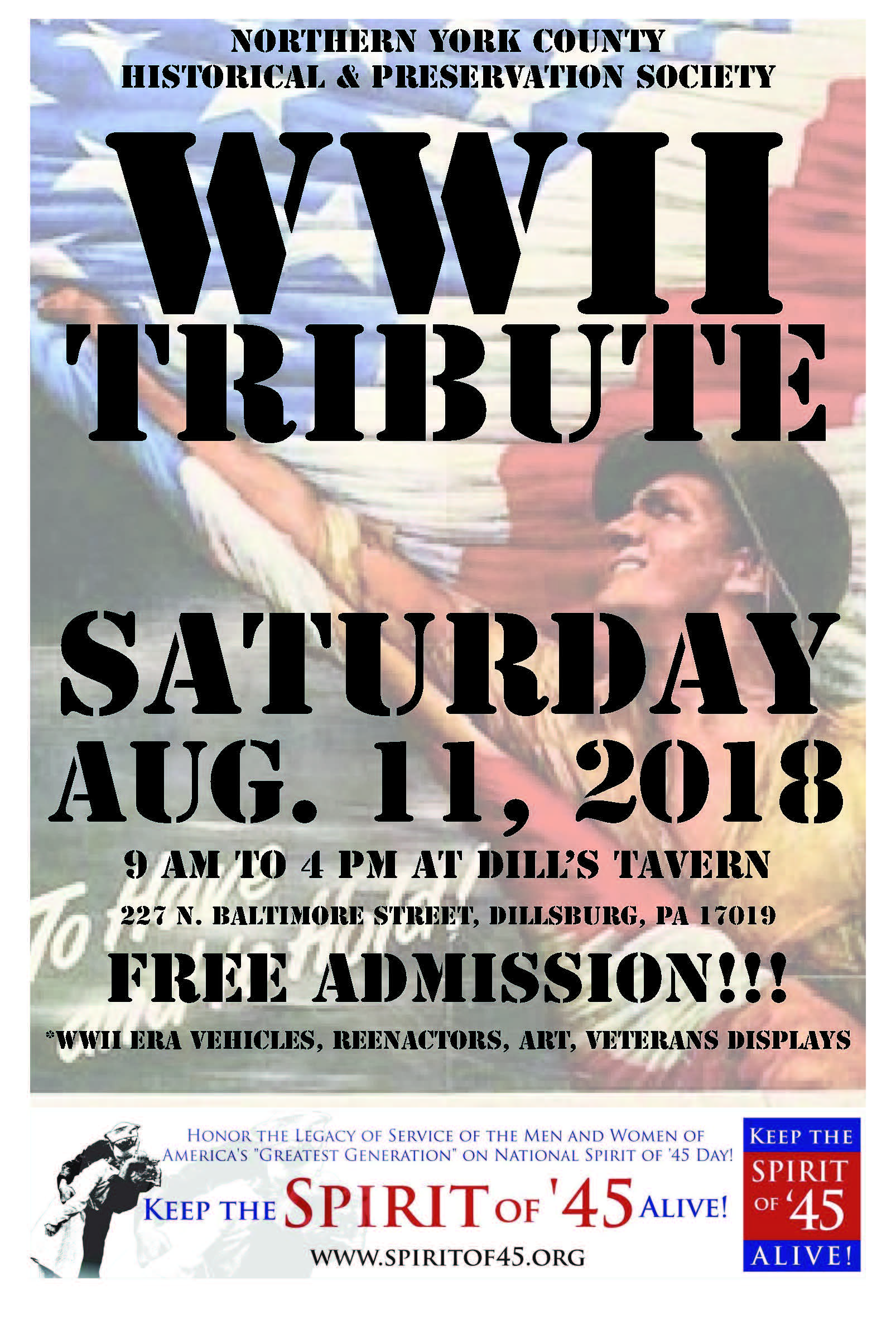 “…December 7, 1941 — a date which will live in infamy — the United States of America was suddenly and deliberately attacked by naval and air forces of the Empire of Japan.” President Franklin Roosevelt’s profound words plunged the United States into World War II. Over seventy-five years later, those words still echo around the globe. The echoes, however, are fading. Of the more than 16 million men and women who served in the United States’ military during World War II, there are fewer than 350,000, or 2%, left to share their stories, anecdotes and oral histories.

This year’s tribute will recognize the 75th anniversary of a number of significant events of the summer of ’43, including: the invasion of Sicily; the bombing of Ploiesti and Schweinefurt-Regensburg; and the continuing battles of the Solomon Islands. Reenactors from the 45th Infantry Division, 36th Infantry Division, Big Red 1, 82nd Airborne, 10th Mountain, German and Russian units, and independent living historians will be creating a camp on the grounds of the tavern with period tents, armament and equipment displays, and demonstrations of drill and tactical movement. This year’s tribute will include a salute to the contributions of the home front and a Red Cross Canteen.

Local businessman Del Cunningham of SOHO computers will be displaying a number of framed and signed art prints depicting significant WWII events. Many of these prints are signed not only by the artists who created them, but by the men who were at places like the Pearl Harbor, Iwo Jima, the Battle of the Bulge, and the Normandy invasion.

The “Wall of Honor” will include the stories of many of Dillsburg’s veterans. Each of the veterans’ histories will be presented in a short biography and photo. A special section will be devoted to Dillsburg High School alumni who were killed in WWII.

The veteran speaker forum begins at 10am. WWII veterans will be speaking and signing autographs at the event. Guests tentatively scheduled include Dick Ruelius, 87th Infantry and POW; Ben Jenkins, B29 weapons control; Karl Mann, 45th Infantry Division, one of the first into the concentration camp at Dachau; Dick Donald, who served aboard an escort destroyer during some of the war’s most brutal battles and witnessed the flag raising on Iwo Jima’s Mount Suribachi; Clem Leone, B-24 crewman and POW; Herb Ridyard, 94th Infantry; and many others. Other area veterans who wish to share their stories should contact Doug Riley at 717.343.1274.

This year’s tribute has again partnered with KEEP THE SPIRIT OF ’45 ALIVE! This national organization is a non-profit, non-partisan initiative to preserve the legacy of the men and women of the Greatest Generation so that their example of personal courage, shared sacrifice, “can-do” attitude and service to community can inspire Americans to come together to meet historic challenges of our era. In 2010, the United States Congress unanimously agreed that a national “Spirit of ’45 Day” be observed on the second Sunday in every August, coinciding with the anniversary of August 14, 1945, the day President Truman announced the end of World War II.

Spirit of ’45 Day recognizes the achievements and positive values the men and women who were the ‘ordinary heroes’ of the generation that endured the difficult times of the Great Depression, fought and won World War II, and then participated in an unprecedented effort to rebuild the world by laying the foundations for a better future for their children and their children’s children, for friend and former enemy alike.