An American Dream, the Dills Tavern And Plantation 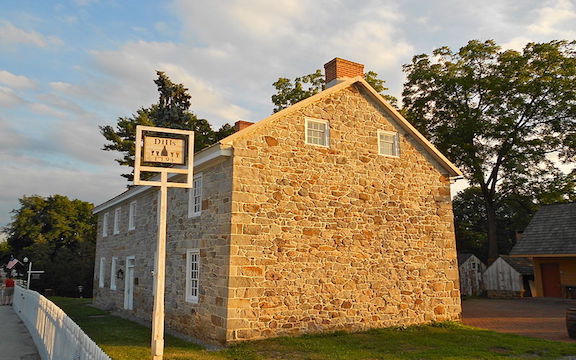 Matthew Dill’s American dream began over 275 years ago on the new frontier west of the Susquehanna River. Records show that William Penn’s sons, Thomas and Richard, Governors of the Province of Pennsylvania, granted to Dill a tract of land containing 504 acres. The Dills and, by 1800, the Eichelbergers, established a thriving enterprise at the junction of two highways critical to the commerce of a new nation.

From that 504 acres, a community was born. Today’s Dillsburg scarcely resembles that small frontier plantation and settlement at the end of the Blue Ridge Mountains. The town centre is bracketed on the southern end by the main campus of the Northern York County School District. The northern end features the last remaining 2.5 acres of the original Dills plantation, an anchor attraction at the Northern gateway to Dillsburg and all of York County.

Acquired in 2003 by the Northern York County Historical And Preservation Society (NYCHAPS), the Dills Tavern still stands sentry on the Baltimore Road. Once a refuge for 18th and early 19th century travelers on their way to or from York, Harrisburg, Carlisle and the busy port city of Baltimore, it now offers a glimpse into daily life in colonial America.

Today’s Dills Tavern is home to a wide variety of educational programs, historically based events and activities that help tell the story of early American life. The site hosts annual tours for local schools, including pre-school, 2nd, 5th and 7th-grade classes. A summer children’s’ history camp, adult education and senior living tours, and weekly docent-guided tours are also offered at the plantation. NYCHAPS events such as the WWII Tribute, Celtic Festival, Christkindlmarkt, and Honey and the Hog, as well as the newly added Dillsburg Farmers Market, bring thousands of visitors to the site to enjoy the history and heritage of the area.

None of this would have been possible without the vision of the charter members of NYCHAPS. Formed in 1983, the local historical society was founded to foster the preservation and study of local history, buoyed by the enthusiasm created by the Nation’s Bicentennial and Dillsburg’s Sesquicentennial. From the inauspicious beginnings in the homes of those early members, NYCHAPS historical sites have grown into a premier destination for many in York County, Central Pennsylvania, and surrounding states.

Attendance at NYCHAPS events totals over 7000 visitors annually, with a geographic reach from the Carolinas to Maine. The York County Tourism Board estimates that the leisure visitor to the county spends an average of $241 dollars per day, which has a significant financial impact on the community. This year’s county-wide estimate is that over one billion dollars will be spent on tourism.

While the Historical Society continues to expand its educational and historical offerings, they are also striving to improve its historical sites to better illustrate early American life. From its initial 2003 purchase of the historic Dills Tavern for $175,000, NYCHAPS has committed over 1.5 million dollars to a program of historic renovation and development that would more accurately reflect colonial life. This long-range strategic program is an investment in the community of Dillsburg.

After the initial purchase of the Dills Tavern building, over $250,000 was spent on recreating the original 17th and 18th-century interiors. This crown jewel of northern York County was placed on the National Register of Historic Places in 2004. Its place in historical lore has been cemented by the many notable early travelers seeking to pass through Dill’s Gap, as well as a visit from JEB Stuart’s Confederate cavalry on July 1, 1863.

Over the last two decades, the society has added a modern kitchen and restrooms at a cost of over $100,000, as well as a period bake oven, smokehouse, and woodshed, all built in the 18th-century style. The Wheelwright shop and demonstration distillery were built at a cost of over $135,000.

More recently, a 1798 log barn was moved to the site to more accurately represent a historic plantation. This unique barn, that includes a modern video screening room and an orientation center, was erected at a cost nearing $400,000. During the 2018 season, a new $35,000 brick walkway was installed to better accommodate visitors with disabilities, as well as to improve access for all.

The most recent project, part of the Society’s 5-year plan, was the acquisition and development of the adjacent commercial property along Route 15. This long-range plan included the purchase of the 1.14-acre property for over $350,000 in 2015.

Phase 1 of the Land Development Plan for the parcel was the construction of a parking lot with convenient access to and from Route 15. The design of the plan includes 25 parking spaces and handicapped parking on the lot, greatly reducing the on-street parking during events at the site. It will also help to attract visitors from the 30,000 vehicles passing Dillsburg daily – to attend events, tour the site, or visit the weekly Farmer’s Market. The parking lot included over $95,000 in site development expenses including administrative, legal, engineering and planning fees, as well as nearly $150,000 in construction expenses.

Phase 2 of the Land Development Plan includes the construction of the historic Eichelberger distillery, based on documented plans from early Pennsylvania distilleries. These colonial distilleries were constructed with a large central fireplace, firebox, and a still encased in brick masonry. In the early 1800s, the Eichelberger’s distillery produced thousands of gallons of Pennsylvania Rye Whisky annually. The area’s commerce depended on the production and sales of this liquid gold. Rye was grown in the rich Susquehanna valley soil, harvested and milled; timber and logs were lumbered; wagons were constructed; mills and barns were built; blacksmiths, coopers, and tinsmiths plied their trades – all contributing to the wealth of the early Dill/Eichelberger plantation. Hogshead barrels of Rye whiskey were shipped to Baltimore in Conestoga wagons which would return with goods and products from the port city. The Dills plantation was the center of this thriving enterprise. The distillery project will provide a glimpse into an authentic colonial process and an important story of the region. The Eichelberger distillery has already been granted a license by the PLCB as the first ‘Distillery of Historic Significance’ in the state.

Also included in the Land Development Plan is a proposed Fiber Arts Building that will house demonstrations and examples of colonial weaving, sewing, knitting, and other textile skills of the 18th and early nineteenth century. The building is to be constructed in the log style, similar to the early buildings on the site.

The Dills Tavern and Plantation has been developed with the generous contributions of the members of NYCHAPS, thousands of hours of volunteer help, and many significant donations by benefactors who understand the importance of preserving not only the culture of early American life but also the particular contributions and history of northern York County and more specifically, the impact of the Dills and Eichelberger families in what is now Dillsburg.

If readers are interested in ensuring the sustainability of the site and perpetuating its legacy, a membership in NYCHAPS, or a gift of a membership, would help continue the Society’s work. Larger contributions are always appreciated and are tax-deductible, as the Society is a 501(c)3 organization. For more information, please contact 717-502-1440, or visit the Society’s website at www.northernyorkhistorical.org. Donations can be addressed to NYCHAPS, PO Box 340, Dillsburg, PA 17019.